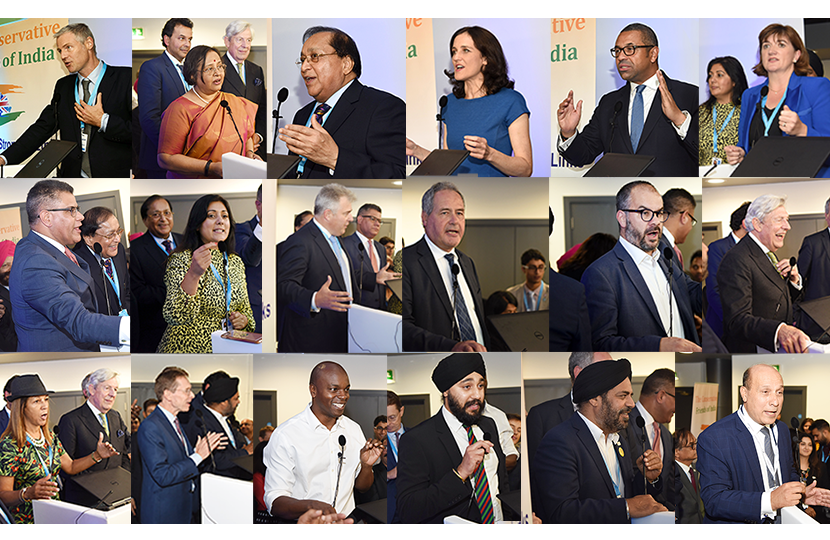 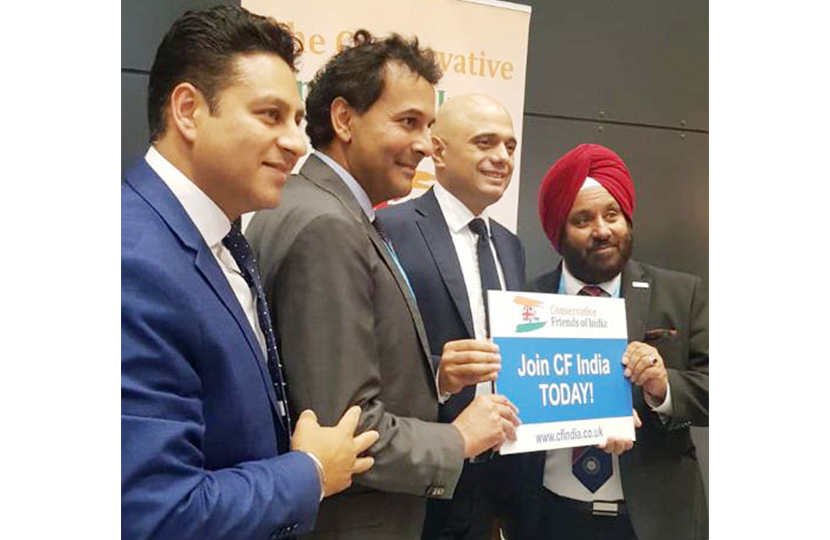 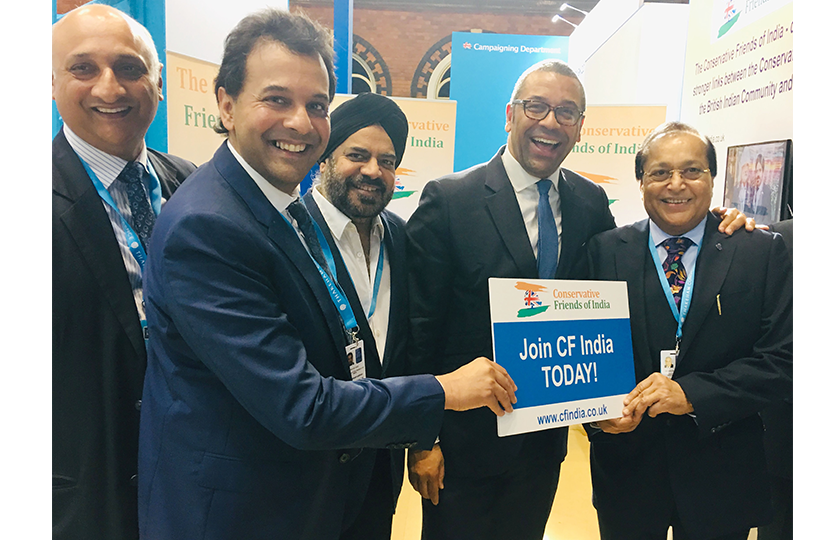 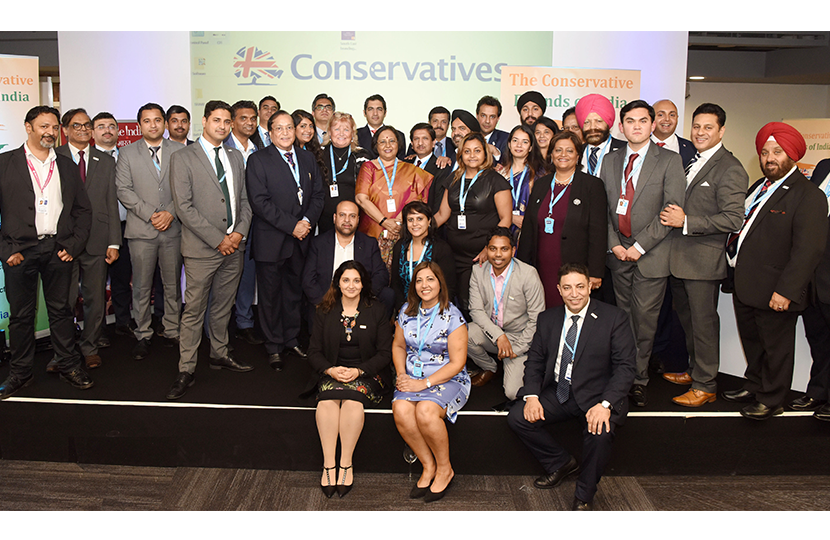 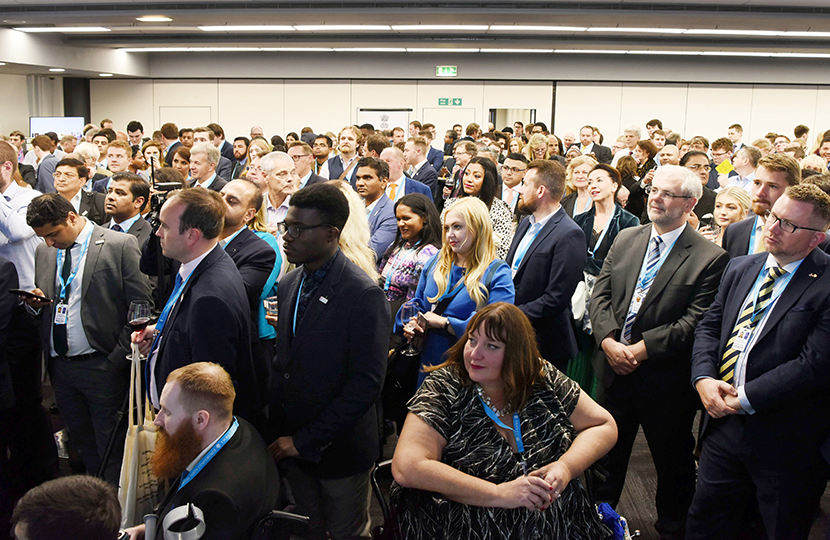 The Conservative Friends of India was proud to take centre stage at the Conservative Party Conference in Manchester with the High Commissioner of India , Her Excellency Ruchi Ghanashyam, when they jointly celebrated the UK India special friendship. The reception was attended by over 400 guests.

The guests were welcomed by Mr. Zac Goldsmith MP, Co-Chairman of the Conservative Friends of India and Minister of State at the Dept. of Environment and at the Dept. of International Development.

Dr Ravi Gidar, Patron of CF India, introduced The Rt Hon Theresa Villiers MP, Secretary of State for the Department of Environment, Food and Rural Affairs. Ms Villiers MP, paid tribute to the appointment of Dr Ranger to the House of Lords, highlighting the importance of the British Indian Community to the Party and to the success of Britain.

The Rt Hon Nicky Morgan, Secretary of State for Digital, Culture Media and Sport, thanked CF India for its support to the Conservative Party and looked forward to CF India’s campaign support across the country. She said, “I am proud of the great links between UK and India in the many areas, including that of Culture and Technology. Today we are a party that knows where it is going, we are the Party to get Brexit done and move on to the other important issues for the country.”

The Rt Hon Alok Sharma MP, Secretary of State for International Development recalled when he was the Co-Chair of CF India and that how today CF India has significantly grown and now plays a central role in the success of the Conservative Party. He congratulated Dr Ranger and his team for all his hard work for the Party, CF India and for being elevated to the House of Lords.

Mr Sharma MP, highlighted the positivity at the Conservative Conference which was in great contrast to the Labour Conference. He closed by chanting “What are we going to do with Brexit”, the audience overwhelming hailed “Get Brexit done!”

Dr Ranger, paid tribute to Dr Prem Sharma OBE, the father of the Rt Hon Alok Sharma MP, for his support over the last 25 years in helping to develop Community engagement with the Conservative Party.

Nusrat Ghani MP, Patron of CF India and Minister for Transport, stressed the need of the importance of CF India members in supporting the Party with its campaigning, especially in the constituencies where the Party has marginal seats. She congratulated Dr Ranger and thanked the Indian High Commissioner. Ms Ghani MP hailed “the great and important links between UK and India” and how at a recent Tech and Maritime Conference, she had been delighted to see companies from the UK and India being represented.

The Rt Hon Brandon Lewis MP, Securities Minister, thanked CF India for all its sterling work in getting more people of Indian origins involved in politics. He expressed how he was overjoyed with the ennoblement of Rami Ranger.

Paul Scully MP, Vice Chair of CF India & Vice Chairman of the Conservative Party, paid tribute to the British Indian community and how important their contribution was to the UK and how important working with India will be after the 31st of October. Mr Scully MP said “India will be the key trading partner for the UK over the coming years and this is further supported with the values of the British Indians and the Conservative Party being one of the same.”

Bob Blackman MP, Vice Chair of CF India, thanked the High Commissioner for her support and said that “the Conservative Party is the true friend of India and I thank the BJP for its hard work.” He highlighted how Labour wrongly passed a motion at its conference against India on the matter of Kashmir. In closing he wished everyone a “Happy Diwali.”

Helen Grant MP complimented the fantastic work of CF India and the great CF India Reception. She paid tribute to the Prime Minister Boris Johnson “in delivering an agenda for all” and that the Conservative Party is about inviting people from all diverse groups, to represent at all levels from local associations, Councils and Parliament.

The High Commissioner highlighted the great strength and further development of bi-lateral trade between India and the UK. The High Commissioner welcomed the new policy of the 2-year post study visa and said “There is a lot of unrealised potential in the bi-lateral partnership, which India hopes will be developed in coming months.”

The High Commissioner mentioned that the recent developments in Kashmir have been used by a few to maliciously misrepresent the true facts. In closing the High Commissioner said “ we look forward to ideas from CF India members to further build on the relationship between our two great nations.” The High Commissioner thanked the CF India Co-Chairman, Secretaries of State and Parliamentarians for their commitment to India.

Dr Rami Ranger CBE, Co-Chairman of CF India, introduced Andy Street CBE, the Mayor of West Midlands and the Shaun Bailey, Mayoral candidate for London. Mayor Andy Street spoke about the strong relationship between the UK and India including trade and tourism. The Mayor thanked CF India for its support given during his election campaign. The Mayor highlighted the importance of the 200,000 strong Indian diaspora in the West Midlands and how they led the West Midlands in many areas including education, business and culture.

Dr Rami Ranger CBE, Co Chairman said “it is an honour and privilege to represent Conservative Friends of India and help develop the partnership between the UK and India, the oldest and largest democracies in the world. The Partnership is based on shared values and will grow even stronger in the coming months and years.”

In closing Dr Ranger said “ Our task is to support the Prime Minister and remain a united Party.” He reminded the guests the importance of financial support to the party. He said, “as we have insurances for our car, house and business, we also need to have an insurance against Corbyn getting into No.10 Downing Street. We should donate to the Party whatever we can as the Party relies on the generosity of its members.” He thanked the Indian High Commissioner, H.E Ruchi Ghanashyam, the Deputy High Commissioner Mr Charanjeet Singh and all the team of the Indian High Commission and all the attendees at the CF India Reception.

Nayaz Qazi, Director Coordination of CF India said “The 2019 Conservative Conference was a milestone conference, there was total support for the Prime Minister and the Government’s agenda for Brexit. CF India has had a remarkable time at Conference and engaged with members of the Party from across the country.”

5. Guests at the Conservative Friends of India and Indian High Commissioner Joint Reception